(We may earn a commission if you buy a product through one of our links, at no cost to you.)

The best Bryant heat pumps are coming from the Evolution Series, series that offers an ultimate comfort for its homeowners, ultra efficiency, great savings and environment protection. When you need a HVAC component to help with heating and cooling your home, look for the recognized brand, and this is Bryant.

Bryant Evolution Series heat pumps come standard with Puron as the refrigerant agent. Unlike older refrigerants, Puron is not damaging to the ozone layer and is environmentally safe.

All of the Bryant Evolution heat pumps also come with a HSPF rating ranging from 8.5-13. This means that heat pumps are efficient so they can qualify for a US Energy Tax Credit providing you decent savings year after year. So whether you are heating or cooling, Bryant’s Evolution Series will get the job done with greater efficiency and less environmental impact than other less efficient heat pumps on the market. 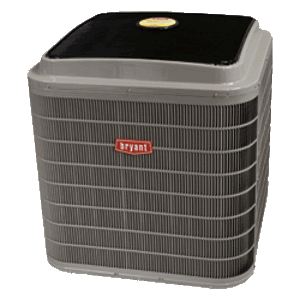 Many of the Evolution Series heat pumps come with dehumidification as a key feature and it is controlled by the Evolution Connex control. The Evalution control is also in charge when there is a problem with the heat pump, by allowing easy diagnostics and troubleshooting.

Humidity not only can make a house feel warmer or colder than it actually is but also aids in the spread of molds or other pathogens that can make you allergic or sick. Having an HVAC system that reduces humidity is a critical aspect of home or business comfort and one that the heat pump design team at Bryant did not overlook for any of its two-stage or variable-speed models in the Evolution Series.

The best Bryant heat pumps in the Evolution series are those that utilize two-stage (289B model for example) and especially variable speed compressors (the best is 280A model), but the homeowners looking for an economical model, Bryant offers models with the single-stage compressors, such as the 285B and 285BNH  models.

For even better performance and high efficiency during the cold winter and when the heating is needed, some model are able to use the Hybrid Heat system, which allows combined work of the electric heat pump and furnace. Most of the heat pumps are loud, but not Bryant (some models) – these are equipped with the AeroQuiet system II design that allows quiet operation, up to 58 dBa on 280A models, for example.

The 280A features the highest HSPF efficiency rating at up to 13 and up to 20.5 SEER. With this level of efficiency you will find yourself saving money even in the winter months by using the cost effective benefits and environmentally friendly version of heating.

This is the top of the line and top rated model that features a variable-speed compressor and advanced electronics thanks to which it earned a reward as the most efficient heat pump in 2014. The variable speed allows smooth power increase or decrease and between 40 and 100% of its capacity.

With a Seasonal Energy Efficiency Ratio of up to 19 and a HSPF rating up to 10 the 289B is one of the best models on the market for you to have in climatically variable areas. Never again will you have to use expensive AC units to cool your house when you can have the efficiency that only comes from the two-stage compressor HVAC system from Bryant. With the noise level of 66 dBA it is louder than the previous model.

The 288BNV is one of the most versatile heat pumps on the market and is as proficient at cooling as it is at heating. The 288BNV is a variable speed model and runs even quieter than the 289B with a minimum decibel rating of 55 dBA, soft start and progression to the maximum speed. It also is exceptionally designed to offer one of the best dehumidification options of the Evolution Series. With its variable speed compressor it is also capable of providing incredibly stable temperature control.

This model is also hybrid heat compatible so it can be used in tandem with your furnace to help produce even more efficient heating during the cold winter months.

The 286B is simpler in terms of components than some of the others; however, its rugged exterior means that it will easily be able to survive the elements in whatever climate it is placed in.

This HVAC unit also comes with Evolution Connex control to help facilitate supreme efficiency as well as providing you with maintenance updates and warnings for your heat pump unit.

The 286BNC is a very mainline model having many of the great features found in other heat pumps of the Evolution Series. With its advanced two-stage system and Evolution Connex control as well as dehumidification abilities, the 286BNC is a very apt model. In addition to all its standard features, it also has the ability to include hybrid heat so you can install the 286BNC model and have it work together with an existing gas furnace to enhance your home’s comfort and efficiency.

The 285B is an effective one-stage heat pump system that is designed to give you maximum comfort for minimum price during low-stage operation. With the noise level of 68 decibels which is around the same sound level as the average vacuum cleaner, the model is considered silent.

With a high HSPF rating up to 9.5, the 285BNH is a perfect heat pump to deal with the stifling summer heat. Cooling down your home has never been easier than with this model which increases its efficiency and cost savings by incorporating the Evolution Connex control. This technology helps you to manage your HVAC system effectively with built in Wi-Fi control, humidity and ventilation control, as well as zoning control.

So when you need the best in heat pump systems think of the name that sets the standard - Bryant heating and cooling Evolution Series. These heat pumps can be the cornerstone of your HVAC system. For the maximum performance and great comfort choose the model with the variable speed compressor, Hybrid Heat availability, highest efficient and Evolution Connex control, such as the Bryant 280 A model.